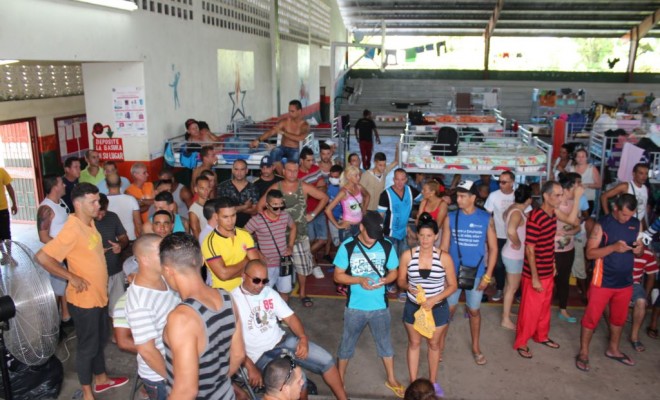 The Cuban exile is not dead. I am 28 and I live outside my country for political reasons, so I consider myself an exiled Cuban. The Cuban exile has not died, and will not die as long as we Cubans have to leave our country to seek in other countried what the dictatorial government of the Castro brothers and their gang has denied us for more than six decades. It can agree that the exile now is different but it hasn’t died, and will not die as along as dignified Cubans are fighting for the future of their country.

To put this in context, some days ago a text circulated on social networks referring to the death of the Cuban exile.

Starting from a situation that since the 90s has plagued Cuban emigration: all the Cubans who are benefitting under the Cuban Adjustment Act, asking for political asylum from the emigration authorities when they reach the borders of the United States but, the truth is, these new emigrants when they received their residency permits after a year and a day, return to visit Cuba, and the vast majority of them do nothing to achieve the political freedom of the country they were forced to leave.

We cannot cover the sun with a finger, the Cuban exile has changed, and greatly. At the beginning of the Revolution the majority of exiles were from the upper class, Cubans whose property had been expropriated, members of Batista’s military, intellectuals, and also those who could see, from the first months, the socialist or communist direction the country’s leadership was taking. Today the people leaving Cuba are not only those against the government, but also those who want to escape from the shortages, the neglect and the bad treatment from the government.

The vast majority of the emigrants of today prioritize their personal wellbeing above politics, event when sheltering themselves under a law that shelters them for political reasons. We could say that only one is ten is tied to opposition organizatiosn in exile, not an exact figure, but Somos+ is a living example that not all are economic emigrants, as many of the Cubans now leaving the island are called; some, when they leave Cuba, are expressing their desire to fight for freedom.

We know that the exile has changed, these are not the years when exile groups planned armed actions from Miami. The exile has also changed like, in many ways, Cuban society has changed. The forms of struggle have moved to the social networks and today’s weapons do not assault directly; now they transform, educated, show Cubans on the island that change is possible through civic struggle, through a knowledge of our rights and a study of our duties, which leads to a gradual transformation of an entire society.

To clarify, this does not meant that young people of the exile–and when I refer to them I am speanking on behalf of dozens of friends who belong to Somos+ and live in the United States, Spain, Ecuador and Switzerland, to mention some of the countries where young Cuban opponents to the Castro government live–are trying to occupy a space that the historic exile might say belongs to a few, on the contrary, we want them to open its doors to us.

We call on this historic exile that some pretend has died, to join our ranks, we want to learn from them and show them that today we believe in a path that could lead us to achievng what they have been fighting for for years: full freedom for Cuba. A freedom where the rights of everyone to think differently are respected, even if we don’t agree with their ideas. That is, those who try to force us to think in a unilateral way, their time is past.

We young exiles who now form a part of the opposition to the socialist government, do so from the deepest democratic convictions, and thus we respect the personal right of every person to decide what to do with their life, but of one thing we are certain: the exile has not died, as long as Cuba is not free we will continue to fight for the ideals of justice and freedom that we desire for our people.