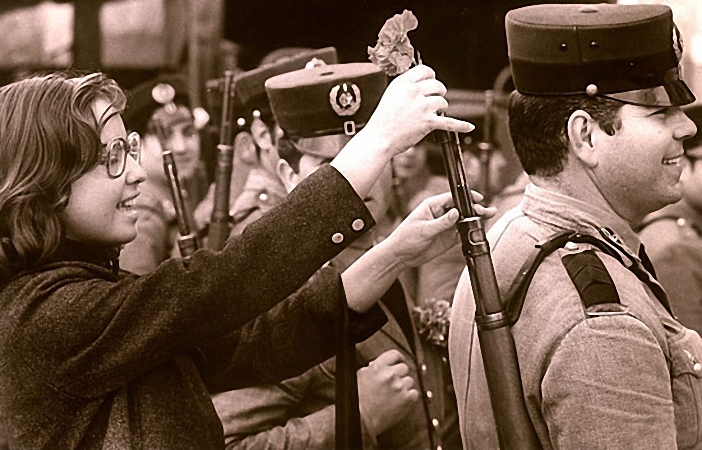 There is a country in Europe that bears much resemblance to Cuba: Portugal. Its surface area is similar (92,000 km2 Portugal and 110,000 km2 Cuba), its population is comparable (10.5 million Portugal and 11.2 million Cuba), and it too has suffered a vast economic emigration (Cuba in present days and Portugal in past years). But there is more:

In Portugal everything came to an end on April 25, 1974, when young officers who were not part of the oppressive oligarchy, said “enough!” and left their barracks.

At 10:55 pm on April 24, the radio station “Emissores Associados” played the song “E depois do Adeus.” It was a warning call.

At 1:25 am on the 25th, “Rádio Renascença” transmitted another: “Grândola, Vila Morena.” It was a call to action. Now, there was no going back.

As always, many anecdotes took place and history would only register a few.

During the first song, four men from Paisano sat together in a car, in the most remote pocket of a park. After the second song they undressed and put on their uniforms. Two homosexuals who happened to pass by, joked about their double condition as homos and military men. The laughter seized after seeing them fully dressed in uniform with the weapons they carried in the trunk.

At that exact hour, Captain José Salgueiro Maia gathered his men and told them: “Men, as you well know, there are several forms of State: the social State, the corporate State, and the state in which we find ourselves. Now, on this night, we will end the state in which we find ourselves. So for those who want to come, know that we are on route to Lisboa and we will end this. If you want to come, join our rank and file. If you don’t then stay.” They all joined in and marched toward the capital. His mission was complicated: occupy the Plaza del Comercio, where the Civil Government and ministries were located.

The Plaza was frequented by many. One passerby addressed the captain: “I am a journalist, what are you all doing?” “We are bringing down the government.” “Can I go back to my journal, share the news and return?” “We are doing this for freedom, and I don’t intend on depriving you of your liberty to inform.”

The radio did nothing else but transmit instructions to the general mass to stay indoors. Few listened. Everywhere, men and women, workers and students joined ranks behind the lines of soldiers.

A lieutenant climbed onto an armored vehicle and looked through the hatch; laughing, he asked: “would you like coffee and toast for breakfast?” Out through the hatch, amid the laughter of his companions, appeared a soldier and his girlfriend. She retorted: “Well, what’s going on, are we free now, or not?”

A general, with a group theoretically under his command, saw and targeted the spectacle. He went as far as slapping a soldier that disobeyed a direct order to shoot Captain Maia. All his shooters disobeyed the order as well and joined the movement instead.

From a tank, a soldier asked a lady for a cigarette. Her name was Celeste Caseiro and she didn’t smoke, but she did carry a bouquet of carnations for the cafeteria in which she worked and she gave him a flower, which she stuck in his rifle. Various hands came forth. They all received a flower and repeated the gesture. That morning, the florists of Lisbon did nothing but adorn rifles with their flowers in what became known as the Carnation Revolution.

Much more occurred. The government surrendered. A new one arose. The dictators fled to exile and those who had been living in exile returned. But those men and women left behind two great lessons:

All men and women in uniform should remember this and no matter what their pledge, their real loyalties need to be with the people and to their republic, and when the moment comes, their place needs to be with them.

Whomever does not understand these lessons needs to remember: tick tock, the clock of History keeps marching on, and it’s not against us.