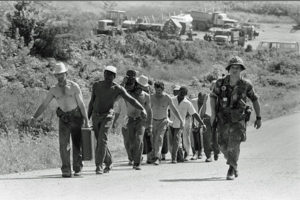 US soldiers transfering Cubans to a prison camp

Somos+, Pedro Acosta — Thirty-three years later, I talked to more than 60 people under age 40 and with more than a 9th grade education; none of them knew exactly what I was talking about.

I asked them: Do you know what happened on the island of Granada in 1983? Most of them looked at me like I was asking them to solve a riddle. Some, the oldest, without being sure what I was talking about, said they thought there had been a military intervention there. Only one explained it to me, with middling clarity, because he had heard about it from his family.

A little history lesson, well hidden! In October of 1983, the Chief of the Armed Forces of that country, at the request of the party in power, “The New Jewel,” staged a coup d’etat and assassinated Prime Minister Maurice Bishop and his entire family. The United States threatened, and days later invaded the island.

A group of Cuban construction workers were there building an airport along with a small group of Colonels sent by Fidel in its presidential plane, AN-24 (el patico), had to confront the elite troops of the US 82nd Airborne Division.  You, who went to build, without the slightest right, without the simplest analysis and for the absurd chimera of someone looking for a military victory over his eternal enemies, is there weapons in hand and in mortal danger.

They did not have the right, nor the reason, nor the recurrent and often false, Internationalism!

I wonder, in a spectacular maneuver of my fantasy, and if, in the face of an uncontainable push of the builders, the elite American troops would have withdrawn: Who were we going to hand over power to? How long would we have remained in that territory? What role would we play there in the meantime?

We, like the ancestral custom of the regime, learned what happened through foreign radio stations and, first of all, those of the “enemy.” Despite there having been Cuban builders there, and Maurice Bishop was a great friend of Fidel, it was not until three days did we offficially here what happened there, when the entire Cuban people had a different version of the events. 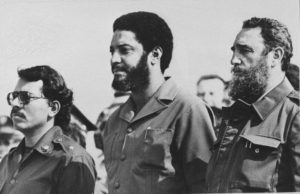 The officers were meant to block the US troops from taking control of the airport under construction, with the help of the builders. But the undesirable things happened. When confronted with the American troops, the immense majority of those who fought back were the construction workers, while the military experts and “warriors” sent by the Commander, Fidel Castro, including the chief of the troops, turned tail and left the field to the civilians. Those Colonels, some of whom were stations at the USSR embassy on this island, and others, wandering the mountains and the city, were detained by US forces.

The Cuban military were cowards for not confronting the big boss and telling him that they weren’t willing to commit suicide as they were being asked to do, and much less demand that others do it. And they were traitors for allowing those inexpert builders to do it. They should never have asked someone to fight. This was not their battle, and what’s more, incredibly unequal. They were asked to immolate themselves, and in whose name? By whom and for what?

While our soldiers were fleeing the news was alienating. The disgrace that was happening was also oversized, huge and fallacious. The last thing they put in the mouth of a brilliant figure on Cuban radio and television was that Cubans, defending their last redoubt, had offered their lives, embracing the Cuban flag.

Because in Cuba it is taboo to talk about Granada, it has not been possible to get figures or data of any kind, I have only written what I remember. I don’t want to resort to foreign data.

There is no mention of Granada because, more than what is said, it was the greatest blunder, among all the orders, of the now deceased comrade Fidel, then Commander-in-Chief.

Also, the position and honor of a man, the head of the Cuban “troops,” has come to be talked of and he is compared with the Bronze Titan: “Emulator of Maceo.” What a crime and how embarrassing!

In Granada, Fidel suffered his hardest, saddest and most sobering defeat. But those who really suffered and felt it were the people of Cuba, and particularly the families of those who uselessly gave their lives and shed their blood in the land of others.

When will anyone ask forgiveness, publicly, to the mothers, wives and children of the martyrs of Granada? When will the people of Cuba get an explanation for such decisions. For the martyrs of Granada, there has been no minute of silence, only suspicion and slyness, that has lasted for more than thirty years.