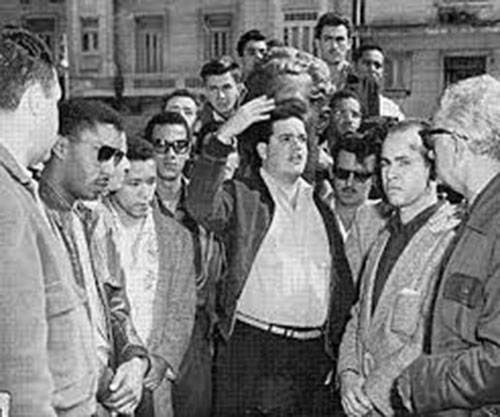 We trust in the purity of our intention,

May God favor us,

To achieve the Empire of Justice in our country.

Somos+, Jose Presol, 13 March 2017 — Today, March 13, we celebrate a date that, fifty years ago, could have radically changed the history of Cuba. A date that could have been, but was not. And it was not because of betrayals that, even today, are not clearly defined

That day, according to the policy of the Revolutionary Directorate, was “to attack the head.” A very high “head”: Fulgencio Batista.

From the beginning of the idea, towards the end of 1955, the goal was unity of action between its time.

In 1956, the plan was picked up again and, recalling the pact between the Directoate and the M26J (26th of July Movement) so-called Mexican Letter, Faustina Perez who was heading the “26th” in Havana was contacted, and he refused to collaborate on orders of Fidel. The writer doesn’t know of any reference to the proposal being communicated to Frank Pais or to other members of the National Directorate, on some dates when Fidel was by no means the Maximum Leader.

Thus, everything was conceived, planned and executed by the joint forces of the Authentic Organization and the Revolutionary Directorate.

Nothing was left to chance. There were enough weapons. Surveillance equipment. Political and military leadership. The leaders were Menelao Mora (for the Authentics) and Jose Antonio Echeverría (for the Directorate). The military commander was Carlos Gutiérrez Menoyo, who had been an officer with the Free French Forces during World War II.

Those who did not participate in the action were intended to: (1) Start the guerrilla action in the Escambray Mountains, (2) Arm and reorganize the Revolutionary Directorate in Havana, (3) Send troops to Frank Pais to be used in the El Uvero combat and to initiate the 2nd Eastern Front.

The plan was complex and simple at the same time: A frontal attack by a group transported in a delivery truck and two cars, which would go up to Batistia’s office and take him prisoner or execute him, and that would be supported by men distributed on nearby roofs, to prevent the arrival of reinforcements; others as support and in reserve along the Paseo del Prado; and a main reserve that would arrive from Guanabacoa.

Messages would be broadcast for the uprising of the militants and sympathizers of the FEU and the Authentic Party throughout Cuba. In Havana they had to concentrate on the School of Architecture, where the group that had previously occupied Rádio Reloj would be organized, armed and instructed to occupy their objectives. As for the Army, the officers of higher rank next to theAuthentics would take control of the garrisons.

Menelao Mora would assume the provisional presidency, until the arrival of the previous President-elect, Carlos Prío Socarrás, and then the process of elections interrupted by Batista with his coup d’etat would begin.

But, if everything was so measured and calculated, what was it that failed? Well two things:

Batista fled from the Presidential Palace at the moment of the attack through a door the assailants didn’t know about.

Someone sabotaged the action. I base  this on two things.

Everything (weapons, communications and vehicles) was checked several times and was in order. On leaving the Presidential Palace a tires of the delivery truck were low in air, affecting the suspension. The driver, Amado Silveriño, insisted on  continuing, promising to get there. Did someone let the air out?  It is not known.

The reserves did not receive the order to mobilize. Who was in charge of sending it? Someone who still walks around Havana: Fauré Chomón. The men who had to occupy the access points and those concentrated in Guanabacoa never moved of their collection point.

The result was, apart from the failure of action, the almost total dismissal of the only two organizations that could have cast shadows Fidel Castro’s aspirations: the Authentic Party and the Revolutionary Directorate.

Fidel can be considered the only winner of the failed attack.