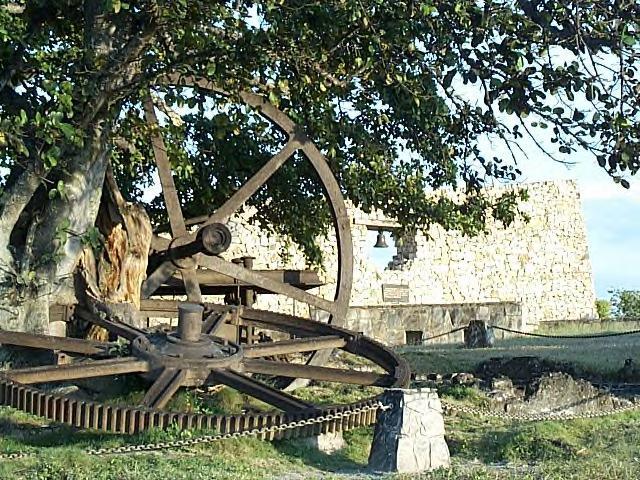 On October 10th of 1868, at the Demajagua sugar mill near Manzanillo, a bell tolled calling for an assembly. This relatively small sound became amplified until it was heard in every corner of Cuba, it is what we call  ‘Grito de Yara’. It was the call of the Liberty Bell, and it announced many important things, but essentially four:

1. That the People of Cuba were declaring their independence from the Spanish Crown.

2. A flag had been raised up for the first time. It was sewn together by the foreman’s daughter, made from a blue dress, a red mosquito net and a piece of white cloth. The seamstress’s name was Cambula Acosta Fontaine (name that sounds of Africa and Europe, forewarnings of a mixed- race nation being born).

3. In order to gain independence a solemn oath to fight was made: to give one’s own life, if necessary, fighting against the government of Spain, but not against the Spaniards.

They had to leave the area, but before they did, like they would have to do many times, they destroyed whatever might be useful to the enemy. They made the mill boilers burst, leaving the huge wheels of the machinery destined for the production of sugar, lying on the courtyard. The destruction was finished off by enemy artillery.

Between the spokes of a wheel, a jagüey tree sprouted. A symbol of a republic also being born. The tree with its trunk and gnarled roots held on to the iron– a reminder that freedom always triumphs over tyranny.

The jaguey tree became sick and died under the Castro’s dictatorship as if afflicted by it. However, as a warning of the arrival of the freedom butterfly awaited by Commander Gutierrez-Menoyo (see footnote: the last paragraph of his political testament), a seedling of the remnant tree sprouted. It has grown, and with its trunk and roots still holding on and taking over the unyielding metal.

Approximately a year ago I was drinking a mojito (why not?) in a bar in Madrid. The waitress waiting on me is speaking to me and I’m staring at her. She was a young lady, about twenty years old, thin, light skinned mulatto, with short curly hair.

– Where are you from?
– Havana.
– What part?
– From… (we won’t give details, as the State Security has small but penetrating eyes, like the alligators from Zapata)
– Woman, I’m from Avenida del Cerro!

And the conversation continued, constantly interrupted by her work. At one point I showed her a picture from the time of the guerrillas and, looking at it, she told me:

– That is Gutierrez-Menoyo, but I don’t know if it is Commander Eloy or his brother, Commander Carlos (the first time that I hear giving him the military rank).

– It’s Eloy. He died in Havana just over one and a half, almost two years, ago. Carlos died…

– I know, in the assault on the Palace. They both belonged to the Directorio and were anticommunist.

– How does a girl of your age know these things?

– The school where I studied is named Carlos Gutierrez-Menoyo and, one day, I realized that we were given explanations about his life that did not add up.  Since then I have tried to find all the information I can about them.

We could not speak much longer because of her work, but I realized that here was Menoyo’s Butterfly. What else is Cuba other than a pretty mulatto girl, skinny and friendly, seeking the truth about the political view of the Gutierrez-Menoyos, Jose Antonio Echevarria, Joe Westbrook, Huber Matos, Frank País, Vaquerito, Camilo Cienfuegos and many others, El Moncada, Palace, Humboldt 7, Goicuría, Escambray, Santa Clara, etc.?

From Guanahacabibes to the Punta de Maisi, from Cayo Jutía to Nueva Gerona, or in any of the cities in the economic or political exile, while there is at least one girl who asks and seeks; the bell from the Demajagua will continue sounding, calling on its citizens not to be subjects.

Footnote: “For no matter how, luck will arrive: fine, silent and fragile as a butterfly full of life, as a sign to these poor people who deserve better. I know there will be a butterfly that will land in the shade. I would have liked to let it know that I would have wanted to give more; perhaps, it would have understood that I could only give my life and that I was privileged to be part of this island and of this People.”