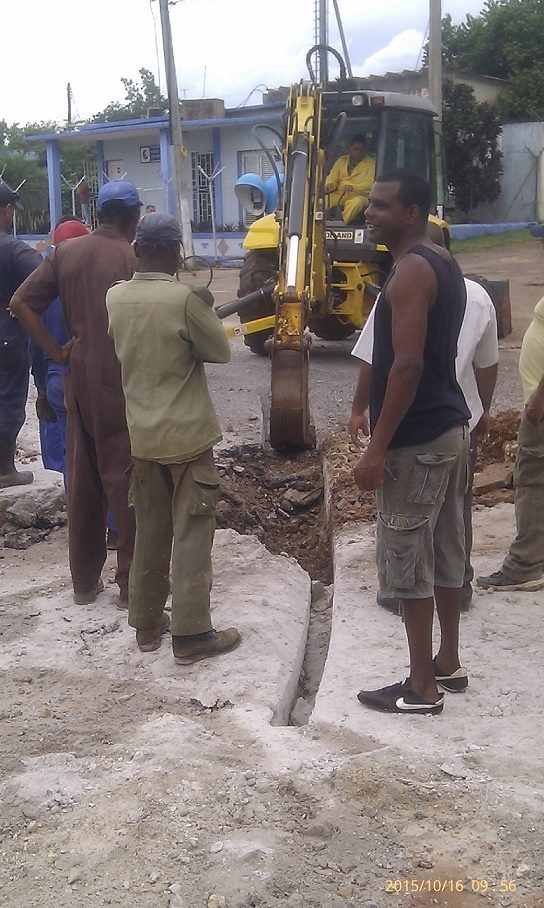 Today is October 15, 2015, and a success that should be transcendental for all my compatriots turns out to be nothing more than a false alarm, one more of so many expectations that remains only that. Another promise to be fulfilled in the long-term, only because “the steps taken should be well thought-out in order to not commit errors.”

It’s true that weeks before the news spread by word of mouth, growing or shrinking according to what one brought to it or took from it, showing this writer that we all believed it would be a reality weeks later.

The so-much announced, glorified, dreamed-of and awaited fiber optic cable called ALBA-1 finally made its brilliant entrance onto the terrain of my little country town, opening a passage between the solid rocks that make up its subsoil, pushing us a little more while we try to shorten the tremendous gap, which on this subject as on almost all, separates us from a large part of the outside world.

And yes, here I was so proud telling people about the immense amount of information that can run through its veins. I became majestic making a show of what it could do and having it rubbed it in my face that in the matters of information and informatization we are, as a good Cuban says, “more backward than the ampalla*” or light years from even the century in which we live.

I can’t deny that I was inundated with emotion, feeling the privilege of remembering that I’m human.

From Venezuela swam the cable, which would connect us with civilization, with our fellow men, leaving behind the primitve life of ignorant cave-dwellers. Now it seemed I finally would belong to the modern era. I already felt better located in time and space. It made me think about the idea of having nearby the key of traveling “to the infinite and beyond.”

In front of me, the brigade of workers and machinery from the army – something already suspicious, hmmm – charged with creating the conditions pertinent to the good functioning of the new technology, were hard at work opening a trench where the aforementioned cable would extend to the terminals, while the curious – like me – little by little were gathering around the work area, asking questions and exchanging opinions about something that also was novel for them, seeing who could pick out the next stone that they would fling away.

Well, it’s not that I like gossip, but I couldn’t avoid being pushed by curiosity to see up close how they were connecting the cable to the terminals. Who would be the object of the test? Because everything that’s done here is submitted to a meticulous test before using it for more people, to avoid a “false” step. Because of this we function so “well.” Because of this our country is in the “vanguard” of “everything.” We can’t give ourselves the luxury of committing “errors.” We can’t give the “enemy” even the least opportunity to criticize us. Well, who is our enemy now? Caramba, we have to fabricate another now that the Americans suddenly became our friends. Well, now someone will have to appear who wants to “blockade” us and put us on some black list.

Well, as I was saying, an irresistible force pushed me onto Street 3, to follow “Mr. Cable” as in his time Theseus did, following Ariadne’s thread that was leading him to the exit of the Minotaur’s labyrinth**.

**A reference to the Greek myth, in which Ariadne fell in love with Theseus and helped him escape the labyrinth after he killed the Minotaur that lived there.

While I walk I wonder about who has been chosen for such an experiment. Finally I turn the corner and follow my cable, if indeed it’s mine. At this height and with all the joy that seizes me, I already feel it’s mine, a part of me and my family. Okay, it’s not a guy or a girl, nor will it be in the bakery or the grocery store. It’s logical that it should be in the library. Nor is Frank here.*** I miss him, but I follow my cable. Where will it take me?

***Reference to a movie about a band leader.

I almost run into a gentleman on a bicycle while I walk down the street, already connected with my friends, investigating things, looking for information, rediscovering my country and its rich history, especially the one not told, exploring a new world and perhaps finding a new girl to conquer in cyberspace.

I come to another corner and look up to calclate how many more were left before I saw where my cable would be placed, and I finally see its destination. No, it can’t be! This has to be a joke in very poor taste! I almost fall on my ass when, before my thunderstruck eyes, my cable, my friend the cable, like a fish in water, is being hooked up at the PNR**** headquarters.

What was it doing there? It recently had come to my humble little town, and now they were surely warning the cable that it wouldn’t be like we thought, no sir, without first having to pass through this place before entering the life of all of us, because here all is done with “order.” This would be its Customshouse, where surely they would remove from it many things it was bringing to me and my people. I suppose they left the cable very clear about what it could or could not say, and what it could or could not let us see.

I felt newly brutalized and regressed again in time, moving away more and more from my friends and from the enormous universe that minutes before told me it was waiting for me. I was on the point of screaming from so much rage and frustration. I can’t deny that I almost cried.

Soon came to mind the image of a large filter through which would pass the information traffic that would travel in all possible ways through my cable. At once I realized it was an illusion to believe that everything would be so easy beneath this Regime of “total” totalitarianism. My naivety betrayed me at thinking during my detective run that this innovation would come to me just like that. Automatically I began to link together the latest stories about the building where the PNR is located, subjected for a couple of months to changes in its structure and some other remodeliing.

Of course, conditions must be created in order to better adapt oneself to the new area of work. I had to change many things so that I felt comfortable with their listening in when I spoke with the “worms*****,” my brothers in struggle.

Today is November 7, 2015, and for me it was going to be a big date in my little rural town. It ended up adding to that long list of things that today move me to continue looking for a different Cuba. I continue dreaming, awake, about something that arrived but continued on, like the waiter that passes in front of you with a succulent plate, leaving behind the smell of what you would like to eat but can’t because your money doesn’t stretch far enough to allow yourself that luxury.

Today November 7, 2015, and it’s almost a month since the arrival in the land of Limonar of the fiber optic cable. My buddy, my brother, I remain with the desire to touch you and a strange, bitter taste that reminds me where I am. I still see in the streets the open wounds made by those machines of doubtful origin, now infested with garbage and dirty water as unequivocal marks of a system that only leaves us that: open wounds full of filth.

Today I want to laugh at myself for being so stupid and for having converted this real-life story into one of those scenes from the fairy tale, “Little Red Riding Hood.” In the distribution of roles, the PNR is the wolf that waits for me in bed after swallowing my grandmother – my cable. I am the tender and innocent Little Red Riding Hood, who arrives at her grandmother’s house and sees her in bed with the face of a wolf:

“Yo! Little Red Riding Hood.” “But grandmother, what big ears you have!”

PNR, the wolf: “Ah, the better to hear you with my dear!”