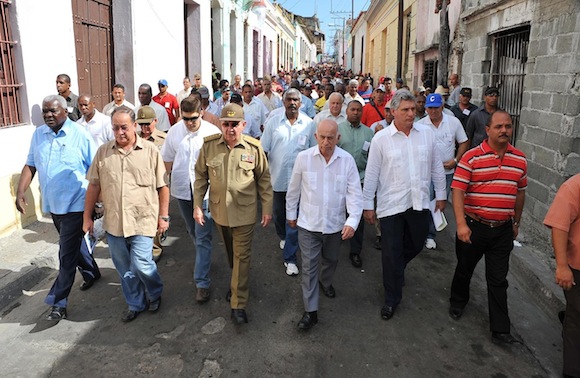 Carlos Raúl Macías López, 15 September 2016 — Starting in the second half of the twentieth century, the world has witnessed a phenomenon without parallel in the history of mankind, one which has been strengthened by the fall of the Berlin Wall and the end of the Cold War, and has increasingly expanded to encompass virtually all strata of society. We are talking about globalization, whose significance has upset politics, economy, technology, culture, trade, bringing a gradual increase in communications and greater interpendence among the world’s different countries.

Human beings’ most basic rights have not escaped the advent of this trend, where international institutions have joined their best efforts and resources to ratify what is inherent and essential for every person, regardless of race, sex, gender, ideology, religion, etc.

Outside from these realities, the the official government discourse in Cuba has employed with tragic repetition the term “political isilation” to refer to the treatment that the United States government has applied, from almost the very triumph of the Revolution, to “try drown the Cuban people in hunger and need, and togenerate in this way, discontent and destabilization.”

According to this line of reasoning, it would seem that the only source of dissatisfaction that the Cuban people might experience in their daily lives, comes from outside (imperialism), and never from the poor governance within. Undoubtedly, the government conveniently has known how to take advantage of this doctrine, and with impunity to undermine attention to such an extent that there are still a few of the ideologically blind (intentional or not), who blame all the ills that afflcit us on “the Americans.” Confirming the saying: “There are none so blind as those who will not see.”

If we objectively stick to the facts, we can not deny that in foreign policy the Americans have made their lamentable “blunders” and miscues (the embargo/blockade), since after 57 years of this policy the same priestly caste remains in power in Cuba. Even the current occupant of the White House, as part of recent bilateral negotiations, acknowledged that “it was time to reconsider the methods and to changet them.”

None of this negates the fact that in Havana there is a regime that rules a hard and rigid hand. Events conclusively demonstrate that the true and most fearsome isolation plaguing us is not coming from Washington, but from the capital of all Cubans. Given this argument, I can not but hold that for things to move forward as they should, the dialogue should be primarily between the government and its own people, and not primarily with our northern neighbors. Because, what does it serve us to get along with those who live nextdoor to our house, if we are at odds with those living inside it? Unlikely coexistence.

In order to shed light on the subject at hand, I must point out that human rights, the Cuba case is controversial and appeal internationally. International organizations such as the Inter-American Commission on Human Rights (CIDH), Human Rights Watch, Amnesty International, the World Organisation Against Torture and others have repeatedly submitted information and reports, with abundant evidence of violation of human rights.

Moreover, the defenders of the Castro government appeal to the fact that in developed countries human rights are violated, in a much more critical way, arguing further that in 2007 the United nations removed Cuba from its list of states that violate rights humans, and that in most of the Antilles the human Development Index (HDI) is among the highest in the continent, comparable even with developed countries in the first world.

This last parameter (HDI) includes health, education, culture, which are ultimately second generation or social human rights, but the crux of the matter is that, for years, the great ruler, and then his brother, have spoken boastfully that these human rights are often raised as trophies of socialism, but ultimately a nation cannot overstate the human rights of second generation, to the detriment of the first generation, or to put it another way, it is improper to base the existence of certain human rights as a justification for desecrating others.

This has been our pathetic reality. To accept this thesis, would be like consenting willingly to be slaves, because we enjoy certain rights, because our master supplies us with food, a place to sleep, books, and heals us when we get sick, but at the same time prevents us from going where we want to go, speaking and associating with whom we want, writing about the subjects we want, etc …

What I find even more disturbing is the fact that, in order to justify certain abuses, the Cuban political system is organized on the basis of the lordship of state power over the basic human rights being breached, violated, trasngressing these rights capriciously, on behalf of the government’s own interests and to the detriment of a completely vulnerable individual at the mercy of it. A simple scrutiny of the Cuban Constitution shows that the interests of the socialist state, as casually defined by the system itself, are above all else. See Article 62.

The questionable phrase “the decision of the Cuban people to build socialism and communism” is simply a euphemism for sidestepping the truth: the government’s ideology is above individual rights and guarantees, since it deprives the individual in the full exercise his or her freedom, and catalogs as a punishable offense the mere attempt to change this decision. As noted, it is not an objective, comprehensive, fair and impartial law but a law dyed with an ideology, therefore, unjust, biased, diffuse, which ultimately depends on the willingness of whomever has the power to decide what it believes is “best for the people.”

The the question asked in the title of this article — “Who violates the rights of whom in Cuba… Washington of Havana?” — the evidence points only in one direction: the Cuban government.