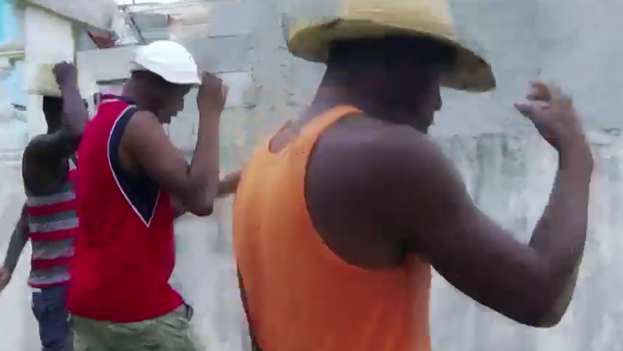 14ymedio, Eliecer Avila, Havana, 8 February 2016 – A few nights ago my wife and I arrived in an almendrón [old American car in use as a shared-taxi] at the Ceiba little park just before the traffic light at Via Blanca and Lacret, in Havana. We we usually get off there when we are going home from El Vedado, in a line of collective taxes headed to La Vibora.

The unwelcome surprise that night was to find ourselves almost in the middle of a pitched war at 1:00 in the morning. At Bella Vista and Via Blanca two gangs of children – for the most part; many of them weren’t even teenagers – were facing off with stones, sticks, bottles, and some carried machetes nearly as big as they were.

Some amorous couples in the park ran away to avoid being hit by the rain of objects of all kinds from all directions that these little pioneers were throwing at each other with an eerie chill. In the midst of the hullabaloo, a voice from Santos Suarez shouted, “I’m done, assholes!”

A boy among those who were “shooting” from the Cerro side apparently tried to take the other side by assault and fell in the middle of the street from a stone to the head right in front of a huge truck that slammed on its brakes so as not to crush him and almost flipped over with a container on its trailer. Several light trucks had to brake quickly and honked their horns, but the contenders didn’t seem to hear anything.

The dispute continues and there is already a line of cars waiting, fearing to pass in the midst of the artillery and lose, at the very least, a windshield. Two “rescuers” from the Cerro side ventured out to retrieve the fallen one who was trying to stand up but couldn’t. His companions covered them, raining fire down from a hill of trash next to the daycare center that was serving as a shield and a park at the same time.

The operation is successful but the counteroffensive is unexpected. From the Santos Suarez side they take advantage of Cerro’s casualty to try to cross Via Blanca to launch an attack that extends to the intersection of Bella Vista with San Salvador Avenue. The Cerro side manages to escape towards the depths of Canal and the invaders don’t dare to continue advancing because they are already deep in hostile territory.

The tallest one, a skinny bare-chested guy with Mohawk-like hair styled after the singer El Yonki, shouts, “Next time we’re gonna kill you, monkeysssss! Let’s go!” The troop retreats with the discipline of a professional army but not before dispersing through several routes so as to avoid attracting the attention of the neighbors, who have gotten out of bed to see what’s going and who have almost certainly called the emergency number, 106.

Indeed, ten minutes later, two police cars appeared, sirens blaring, tires squealing, looking unsuccessfully for “the brawlers.” They question the neighbors who are cautiously doing damage control, but no one answers. Better not to risk that an indiscreet cop could reveal the name of an informant, or that from the shadows someone might see them giving information and take reprisals.

The next day in the morning, all the talk in the line to buy bead is about “what happened last night.” In the street and along the facades that was the battleground, are the marks of the impacts of the stones, glass bottles, and even the broken windows of a Russian-made Lada that was parked in front of the bakery last night (wrong place, wrong time).

This is a faithful description of what happened that night and what is happening ever more frequently not only in the Cerro neighborhood, but in many Havana neighborhoods, where often there is mourning for some victim who dies.

It is noteworthy that these gangs are made ​​up of children who are often under 14. These aggressive boys have a very strong sense of identity with and commitment to their group, which revolves around two or three older leaders with experience in the art of street fighting. In our areas we now have gangs that everyone knows, such as the one that calls itself “The Outlaws” and an even more popular gang made up of girls who identify themselves as “The Apululu.”

What would happen if for some reason these groups came to be armed? How much power could they get? Would we have the self-employed paying them protection money as happens in other Central American countries?

All this and more can easily come to pass if the already terrible economic situation and the quality of education continue to deteriorate and there are no incentives or direction for teenagers and young people; but especially if it continues to be the priority of the State to invest its scarce human resources and materials in repressing those of us who want to confront the real problems and take steps to resolve them.