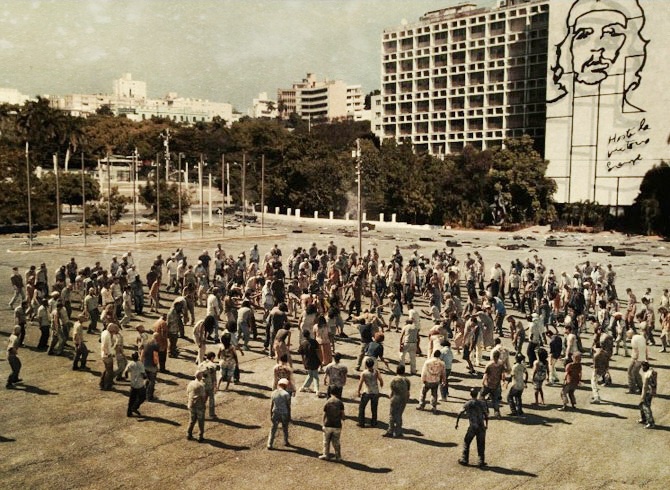 There is a thesis study which states: “The economic problems in any society are perceived above the political and social ones. When the economy doesn’t work, the other two fade to the background and people start focusing exclusively on economics.” This is like saying that “the economy and material interests are the basis of socio-political behavior.” Leftist radicals refer to this as “Capitalist individualism,” the result of a “Consumer and Neoliberal System” that makes people slaves to Products and Markets.

Now, in order to clarify certain aspects of this reasoning, I will share a very popular, somewhat crazy Cuban point of view: “This country is not the best in the whole world, but it’s safe, we have peace of mind, and with money life here is better than in any other developed country. The problem is how to make that money. That’s our Achilles’ heel: the economy. My desire is to leave one day and strive to get the money I need. The rest is none of my business, and it shouldn’t be, either. If this country needs political changes, those who are involved in politics are the ones who should do something. What is up to me is to improve my own life as much as possible; politics is for politicians, because politics is too nasty and useless.”

This popular approach, with its different variants and interpretations, brings us to the heart of the matter, which lies in the relationship between economic, political and social issues. The assumption here is that the economy is not affected by how sociopolitical factors work in a country. The sense here is that our problems now are far from the extreme cases that could lead to a popular uprising (as in 1994), because the current situation doesn’t warrant the effort and risk involved. In the end, in one way or another, some Cubans say, if we accommodate we can make a living and get away with whatever the state tacitly allows. This can be as immoral as theft, corruption, nepotism, favoritism, illegal businesses disguised as legal ones, jineterismo (prostitution, an activity that flourishes from the patronage of foreigners), etc. More “legitimate” variants include international missions, tourism, privileged jobs or positions, self-employment, etc. In exchange, the state imposes only two conditions: silence and compliance.

These serious economic conflicts bring about a distorted political vision and a kind of social peace. This is the source of the hopes and expectations of Cubans per the restoration of diplomatic relations with the U.S. and the new political attitude toward Cuba. While some have not yet recognized this, it will change the politics inland.

“Socialism” fails when its primary focus is on the interests of the masses and on only one aspect of man: the “Social Benefit.” The end result is a paradox: what starts out as an effort to benefit the most people quickly leaves control of politics and the economy in the hands of a few through extreme institutionalization. Eventually, every aspect of a human being’s self-determination becomes subjugated to an abstract concept, the “society.” Proponents of this doctrine, drunk on their social euphoria and believing that they are building a “humanistic and moral paradise,” neglect the essential aspects of progress. Those centralized systems force people to focus on “social interests,” rather than allowing the “individual interests” to merge with the practice of values toward the common good.

The natural instinct of every being on earth is generated by interests, be they positive or negative. These are as varied as the human spectrum, and they depend on the environment where the individual develops and grows. As a rule, people are driven by a general desire to be responsible for their own destiny. Paradoxically, the social projects that promote “Marxism Leninism” at the cost of extreme suppression of individualism accelerate the end result of capitalism, resulting in control of wealth and the means of production in the hands of a few who enjoy abundance while the subjugated masses suffer generalized poverty and a lack of opportunity. When there is enough wealth and the opportunity to make wealth for those who want more, there is ambition and greed, but when there is scarcity of wealth and opportunity while a few enjoy certain privileges, ambition and greed become a national epidemic. These evils, in abundance, are the fault of man himself, but the blame for scarcity lies with the state. That’s what happens in socialism, where envy and materialism, which supposedly are rejected in political speeches, become your best tools. The citizenry falls into a kind of social zombiehood, where the only remaining instinct is a blind drive toward material survival.

No matter which flavor of substantial and economic changes are perceived, the main axis of power and changes in Cuba still has not changed: A government that does not accept its mistakes and people who do not recognize their own political laziness, complicity and lack of freedom. The problems will continue if the citizens are not aware of the importance of their participation (regardless of where they reside). If the citizen is divorced from politics and civic responsibilities, we will never achieve the necessary progress, because the same factors always bring the same results. Our national hero, José Martí, already said it: “The overall happiness of a people rests on the individual independence of its inhabitants.”

External freedom flows once we understand and exercise our inner freedom. And there is no worse prison than the one we as citizens impose upon ourselves, believing that the solution of our problems does not come out of our own initiative, however small or simple it is. Understanding and proper exercise of that individual freedom is the key to everything else, because that is where our happiness resides.

Only by being free in soul and spirit, will we one day be free as a land and as a nation.