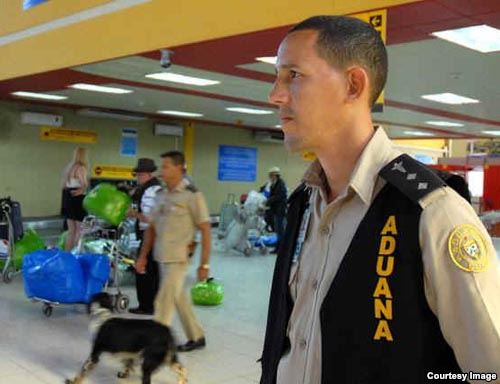 Somos+, Eliecer Avila, 4 October 2015 — Everything appeared normal until I got to the immigration desk. There the official meeting me had a sign on his screen with the word “CONTROLLED” flashing in red. With more or less discrete gestures, the young official started dialing code numbers to his superiors to come to the booth to “deal” with me. In three minutes his boss appeared who indicated I should follow him and who took my passport.

After about half an hour a different official appeared who accompanied me passing through immigration and told me to collect my things… As usual, many people waited about an hour for their bags from the Madrid-Havana flight because they arrived in dribs and drabs… When my suitcase finally appeared, I’d just picked it up when two other officials, this time from Customs, indicated I should accompany them for a “routine control.”

Knowing these things and how they work, I tried to advise my wife who was desperately waiting outside but they told me I could not use my phone. Nevertheless I managed to tell her, “things are looking bad.”

First I passed the suitcase, the little hand luggage and the laptop through another special X-ray machine, and then they brought me to the tables prepared for this purpose and began to minutely search my luggage with the meticulousness of a surgeon performing brain surgery.

They noted everything, at the same time asking me quesitons about my trip. With special interest they set aside four books, four journals and blog notes. Also 8 flash memories I’d been given by the Spanish think tank Foundation for Analysis and Social Studies (FAES), which they gave to all the Cubans.

The titles of the books were: Digital Citizenry, European Union – Latin America, Autobiography of Gandhi, and Letters to a Young Spaniard by J.M. Aznar.

They read several fragments of all of these, and especially Aznar’s book, which had a large photo ofhim on the cover. The customs officer asked me, “Is he a writer?” I told him no, he’s the president of Spain.

They also spent a long time examining a magazine that talked about Australia and its great humand evelopment. The problem with the magazine is that it attributes the success to three factors: Democracy, Market, and Transparency. For those responsibile for censorhip in Cuba today there are certain words that will trigger an alert that soemthing must be confiscated from a passenger, and the two most dangerous of these are “Democracy” and “Human Rights.”

This time, fortunately, after three different people pawed through my tests, they came to the conclusion that they were not “materials to spread counterrevolutionary propaganda.”

They then decided to sieze the flash memories, because according to the “regulations” I only have the right to bring in two. I explained that I had two for my own personal use, and that these 8 are ones I brought as gifts for family and friends because I promised my grandmother to bring her some Christian music, others are for my sisters for their schools, etc… but they weren’t having it, “It’s not possible” to let me keep any of them.

At this point it’s been more than three hours and the worries of my wife, family and friends who are waiting for me are growing by the minute. However, now begins the weightiest part, the paperwork to sieze the flash memories…

They bring a green bag in which they fit the suitcase, throw in the little memories, and begin to fill out forms and describe the characteristics of each object in question: color, aspect, brand, capacity, status… circumstances… what I said, what they said… my data… their datas… all that while standing and watching passengers from two planes that arrived after mine leave the airport.

At this point, the only thing that interests me is getting it over with. When they finally tell me I can leave, I say goodbye and rush to the door.. and on leaving see that I have dozens of missed calls and messages. An army of friends inside and outside of Cuba are ready to be my voice everything if they had decided to keep me longer.

I don’t hold a grudge against the young soldiers who perform this demeaning task. the truly perverse are at a much higher level. Looking for the cameras and pulling the strings of an apparatus that if you don’t bow down, makes you stronger.

To dignify the worl of a whole generation of soldiers, not only with better wages but with better training to protect our borders from the real dangers and respect everyone’s human rights, will be a priority in the future we are going to build together, them and us.

Thanks to everyone for your concern and solidarity. My best hug.