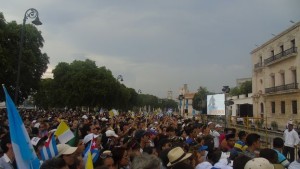 Several months ago, when the young students of Father Felix Varela Cultural Center learned about the Pope Francis’ visit to Cuba, joy spread among us. Especially when we learned that the Pope’s agenda also included a private meeting with all the students. However, the joy was short lived and the concept we had at that time was completely transformed.

It became a public event where young students at the Center would have no special deference in comparison with the rest of the guests. But still the excitement of meeting in person the Bishop of Rome and hearing from him, meant that from two in the afternoon on Sunday, hundreds of us gathered near the place on the Malecon, waiting for the permission to come in.

Metal barriers blocked the way and security guards repeated to each question: “Until prior notice, no one can enter.” After a long time outside, the students of the Center got together and decided to contact the rector, Father Yosvany Carvajal. In this way it was made possible that there would ba at least a small advantage for the students of the Center and that we would be the first to go enter in order to be as close as possible to Pope Francis.

We had still long hours ahead under the heat, standing and thirsty, but they were borne with great joy. Bishops from Haiti, Mexico, Spain, United States and Cuba, went up to the podium to thank everyone for their presence, and in addition to introducing themselves, they expressed their best wishes towards the people and the Cuban youth.

An excellent concert by Martin Valverde made the hours pass quickly and also helped to cope with a last-minute rain which delayed the meeting with Pope Francis.

Finally there he was. I confess I expected a happier Pope and a longer and more intense exchange with those present, but the experience of that afternoon filled me with satisfaction. Concepts such as reconciliation, hope and dialogue with the opponent made me feel free, as I had not felt for a very long time. His main message about understanding and talking with those who think differently brought tears to my eyes. Especially because, when Pope Francis uttered that phrase, a chorus resonated out of the crowd saying: “If they allow us.”