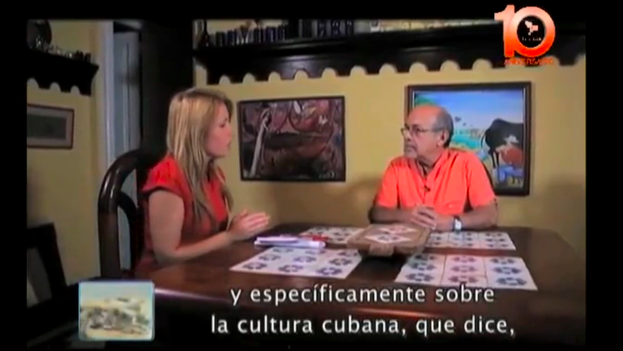 Recently the Cuban intellectual Rafael Hernández, editor of the journal Temas (Topics) and moderator of the debates that take place on the last Thursday of each month at the Fresa y Chocolate (Strawberry and Chocolate) center, gave an interview to the journalist Cristina Escobar for the program  Interviews From Havana by the  Telesur network .

The interview was conducted in English, and broadcast with subtitles in the early morning hours for Cuban viewers. In it Rafael Hernandez defends some theses that have been put forward for some time in the intellectual spaces tolerated by the government, and he proposed a “new look at the theoretical conceptualization of the socialism we need.”

When asked what to do with the fact that “the enemy press takes any criticism that comes out in the Cuban media to amplify it against Cuba”, the intellectual responded with emphasis and determination: “We must tell the truth, period,” because he believes that “it is better to have a discussion on any topic in our camp, than to allow the enemy to take us to his.”

In the interview Rafael Hernández makes innumerable references to the “enemy” without it being clear to me exactly what or who he means. I do not know if I myself, or my friends, many of my neighbors or my fellow students, who think differently from the Government of Cuba, are part of Rafael’s “enemy.” I hope not.

On the other hand, when he encourages us to “tell the truth, period,” it is also not clear to me to whom he is directing his message. Honestly, I do not believe that those who resist telling these truths are journalists. I know many of them personally, and by reference many more, and I am sure that they one hundred percent share this vision of the dignified and independent role that should be played by the press anywhere in the world. So who or what then prevents them from telling the unvarnished truths? The custom of not speaking them? Or is it that, in front of the cameras, everyone defends this “necessary sincerity” but in the spaces where it is truly decided what will be aired and what will not, no one is willing to assume the costs of telling the truth?

Are journalists the ones who decide what is published in Cuba? Is it perhaps the directors of the media? I think that as a example of what he himself demands, Rafael Hernandez could begin to say “the truth, period” recognizing that it is a tiny group of bureaucrats at the exclusive service of the Communist Party who decide every letter, voice or image that Cubans throughout the island see, hear or read.

I liked his defense in favor of a political and public debate in the national media. Like what more or less happens in the public space he leads. I clarify this saying “more or less,” because indeed, it is true that normally no one is denied entry to these events, but it is also true that the panel does not usually represent the colors of the political spectrum of any nation in the world. Only in the audience can this diversity be seen from time to time. It is also the case that some dissidents speak. But they have only three minutes to do so and then the panel can dismantle everything they want, without the ongoing right to respond.

A debate, technically, is something else. In a debate, people who defend different points of view can count on a fair and reasonable time not just to defend their position but to question the proposals of their counterparts in a sequence that makes it possible to plumb the depths of each topic. For this, you have to have good intentions, and select exponents of similar intellectual levels, or at least those who enjoy public recognition in the sphere they defend.

Following this logic one could have a debate between Rafael Hernandez, on the one side, and Reinaldo Escobar on the other, about “journalism and truth in Cuba,” for example. Would the director of Temas accept this debate? Would he feature it in his magazine? I am sure that if he did it would break audience records and the results would be very useful.

I believe that when certain authorized intellectuals or thinkers talk about the necessary existence of public debate or of public spaces, they don’t always take into account that none of these things exist in Cuba.

Neither the Party nor the Government nor the intransigent Communists have anything against debate itself, what they can’t bear are the consequences. Because four good televised debates on crucial issues, no holds barred, in a framework of respect and civility, would collapse the entire house of cards.

I invite the director of Temas with regards to what he seriously proposes to be the promoter of the first public political debates in Cuba, similar to those held in other latitudes, involving communists, liberals, and other visions, all essential.